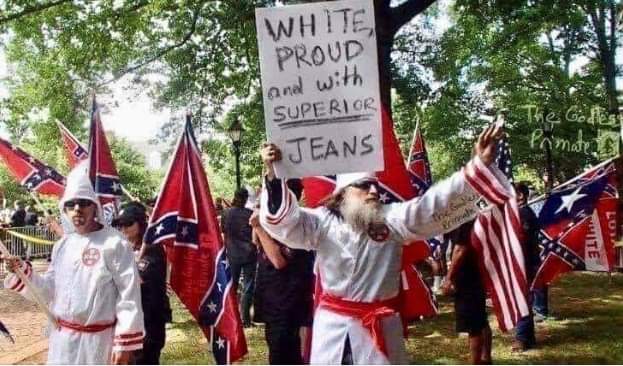 This utter bollocks is doing the rounds on social media again. It’s just crying out for a response.

“Let me first say I am not racist I have many friends all over the world, all colours & religions but I think this is very true of some people.
A thought provoking passage written by an Englishman about the current situation in HIS homeland – this is thought provoking and is equally relevant in any other country.”

It’s only thought-provoking if your thought is limited to superficial bollocks. That is very definitely the same in every country.

“I have been wondering about why whites are racists, and no other race is?”

There are racists in all societies. The Japanese are extremely racist toward Chinese, even employing people to research family trees to prevent Japanese people accidentally marrying into Chinese heritage families.

And your point is?

“And then there are just British. You know what I mean, plain ole English people that were born here. You can include the Welsh, the Scottish and the people who live off our shores of Great Britain.”

Ah, You mean those descended from North European tribes like the Celts, the Britons (now the Welsh), the Picts, the Saxons, the Angles, the Jutes and, of course (although not strictly a tribe) the Vikings. Or maybe you’re thinking of earlier indigenous peoples like the Romans or even earlier like the Icaenae or the Votadini tribes. And even they, like the rest came from elsewhere. This land has no indigenous people. Everyone came from somewhere else at one time or another.

“You say that whites commit a lot of violence against you. So why are the ghettos the most dangerous places to live?”

I suggest you read about the “Broken windows” experiment or perhaps the history of white people massacring blacks such as those at Tulsa. That might widen your perspective a bit.

“You have the Muslim Council of Great Britain.”

Not unlike the Church of England’s ‘General Synod’.

“You have Black History Month.”

Indeed. Given that most black people in the West are descended from kidnapped and enslaved forefathers whose traditional cultures and identities were erased by their owners it’s an important part of ensuring people maintain a sense of identity. White Europeans don’t tend to have that problem. Almost all our history is taught from the perspective of white, European, Imperial hegemony.

“You have swimming pools for Asian women.”

What’s wrong with that? There are also private ‘gentlemans’ clubs’ for wealthy, male Europeans.

“You have Islamic banks for Muslims only. “

Because Islam’s rules on usury aren’t compatible with Western greed.

“You have year of the dragon day for Chinese people. “

“If we had a White Pride Day, you would call us racists.”

“If we had White History Month, we’d be racists. “

Nope. We have 11 of those every year.

“If we had any organization for only whites to ‘advance’ OUR lives, we’d be racists.”

Yep. Because nationality is different from race. For an accurate comparison you’d need to consider ‘Miss Arian nation’s and that really would be racist… And Nazi.

“If we had a college fund that only gave white students scholarships, you know we’d be racists.”

College scholarships tend to go to disadvantaged or discriminated against groups. They target BAME as well as those in poverty, those from disability groups and those with disadvantages from all sorts of groups. You seem to be ignoring everything except skin colour. Why is that?

“There are over 200 openly proclaimed Muslim only schools in England. Yet if there were ‘White schools only’, that would be  racist!”

There are loads of Christian faith schools too, and Jewish. For all I know there are Mormon and Sikh ones too. How did you switch from religion to race again, by the way? You’re beginning to look extremely racist, I’m afraid.

What rights have white people lost to black people in UK? I mean actual rights, not just made up bollocks about flags and shit.

“You are proud to be black, brown, yellow and orange, and you’re not afraid to announce it. But when we announce our white pride, you call us racists. “

Anyone who thinks skin colour (an accidental product of DNA) is something to be proud of takes themselves far too seriously. Skin colour is meaningless. Anyone who thinks it’s a source of pride clearly has nothing actually worthy of pride to crow about instead.

Bollocks. The union flag flies all over the place in UK. As does the St. George cross. That doesn’t make you racist. Your current Facebook post with it’s distortions and half-truths probably does, though.

“You rob us, carjack us, and rape our daughters. But, when a white police officer arrests a black gang member or beats up an Asian drug dealer running from the law and posing a threat to society, you call him a racist.”

Anyone who bothers to read the newspapers (not far right comics like the Daily Fail or The Scum can see just how ridiculous you’re being now.

If all you have to be proud of is race then yes, by definition, you’re racist.

“Why is it that only whites can be racists??”

We already covered this. Racists come in all colours.

“There is nothing improper about this e-mail.”

Except that it’s bollocks throughout.

“Let’s see which of you are proud enough to send it on. “

Why would anyone want to be associated with this ridiculous bollocks?

“I sadly don’t think many will. That’s why we have LOST most of OUR RIGHTS in this country. We won’t stand up for ourselves! “

Precisely which rights have you lost? What can’t you do because of race issues?

“BEING PROUD TO BE WHITE! It’s not a crime, YET… but its getting very close! “

Nope – stupidity at being proud of random biological happenstance isn’t a crime, but it is a very clear indication of some pretty insurmountable character flaws. That’s probably why you have few friends who don’t think exactly as you do.

“It has been estimated that ONLY 5% of those reaching this point in this message will pass it on!”

Made up stats attributed to invited sources are pretty obvious tactics. Is that really the best dog-whistle you’ve got?

One thought on “Racism in (very superficial) disguise”