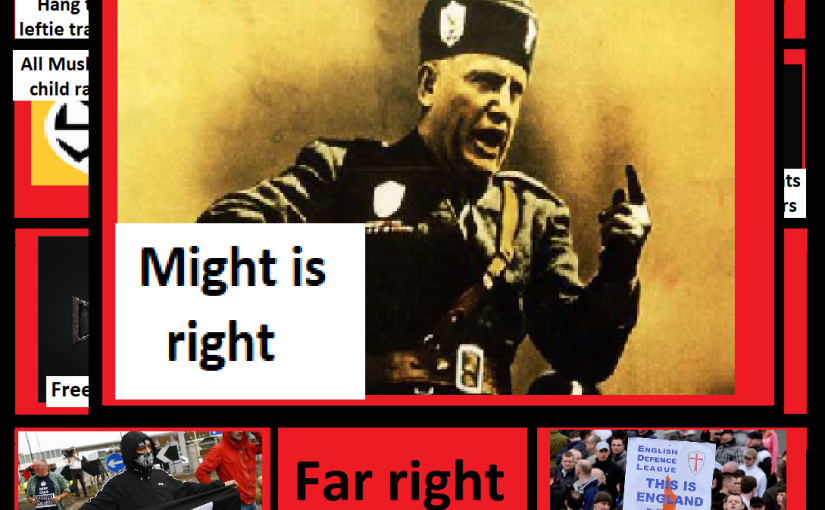 The fash don’t often say this so blatantly but it’s very clearly what they mean when they offer violence to get their political way. When they talk about what they want to do to those who oppose them they clearly are drawing upon the mindset that tells them their entitlement comes from their physical strength. When gangs of swastika clad thugs terrorize the streets of UK, Europe and America they’re not inviting people to discuss policies, they’re threatening to crush all opposition.

And they have the cheek to call themselves democratic. It’s always worth pointing that out.

The usual retort is that lefties won’t talk to them. They’ll witter on about freedom of speech which is covered later in the series. A fun response is often to explain that you’re willing to talk it through with them right now… and then see if they can.

The sad fact is that most of them don’t understand the first thing about the ideology they espouse, the development of fascism and neoNazism or the manipulation of information that brought them to accept the current lies of the far right. You won’t win any contests here because the fash will almost certainly just insult you and move on but you will have demonstrated to them just how ill-equipped they are to defend their views and that’s a good start.

Once again, the aim is to get them to understand that there are holes in their arguments. Many fash won’t have looked into their ideology enough to see those holes in the first place and exposing them to that fact may be the beginning of their road away from hatred.