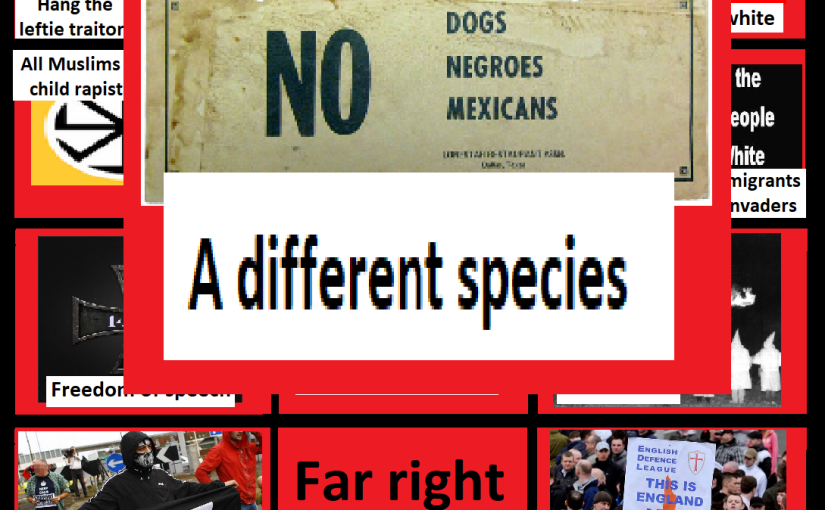 This isn’t just ironic, it’s a wonderful illustration of the complete and utter misunderstanding these racists have of the process of natural selection they claim to rely upon. The basic confusion appears to be based in old testament assumptions where the term ‘kind’ is used instead of the more modern ‘species’ (Genesis 7) and where slavery actively is supported along with the purchase and/or capture, absolute ownership and slavery (including sexual slavery) of those who are ‘different’ (Exodus 21). Exodus and Deuteronomy define such enslaved foreigners as ‘property’ or ‘money’ and permit passing them on as chattels to future generations as part of a patriarch’s estate.

These early passages were used as justification for the slave trade which caused so much death, hardship and misery. They were also used to support Plato’s ‘ladder’ of human superiority with black women at the bottom and white, European men at the top. Such primitive notions have no basis in fact and indeed modern scientific consensus clearly shows just how ridiculous these notions actually are.

Modern biology defines speciation in several ways, the strongest and most generally agreed upon is based upon the viability of offspring. To put it another way, if two rabbits can produce offspring that themselves are capable of producing further offspring then they belong to the same species. If their offspring are incapable of producing offspring with earlier generations of rabbits then they would no longer be rabbits. We see this speciation event in modern ring species. For example Salamanders living around the rim of Death valley can all breed with their immediate neighbours, right the way around the rim but those living at the extremes cannot interbreed. Over the immense distance of the valley’s rim selection pressures and remoteness have led to the development of two different, non-interbreeding species of Salamander. This is a process of speciation observed in geographical terms rather than temporal.

They don’t appear to understand basic humanity either but that’s another story.