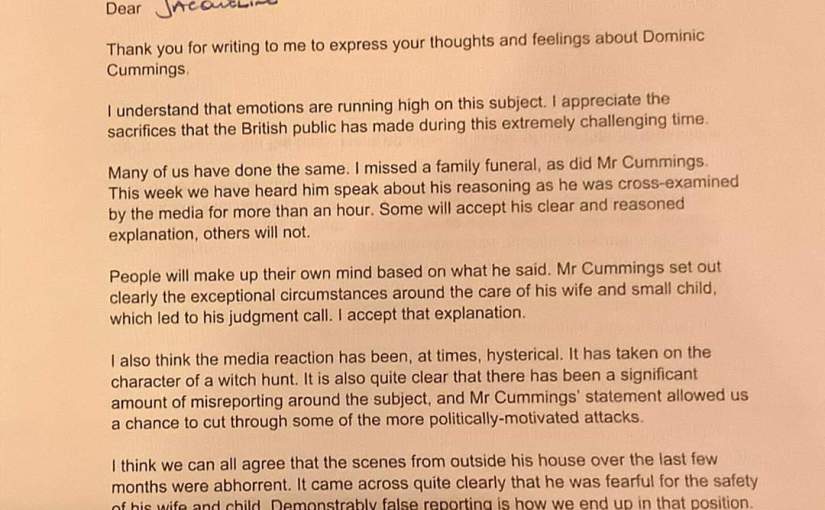 Two friends of mine received the exact same letter defending Dominic Cummings little lockdown jaunt from our Tory MP, Mark Jenkinson. That’s no big deal. The amount of complaints probably meant a job lot from the printer made sense.

What’s concerning, contemptuous, even is the way that the letter appears to have been written by two different people. It’s almost as though it was forwarded to constituency MPs from Tory HQ with the instruction to add a little personal information to make it look good.
Here we unpick that letter line by line. It’s not pretty, I’m afraid. 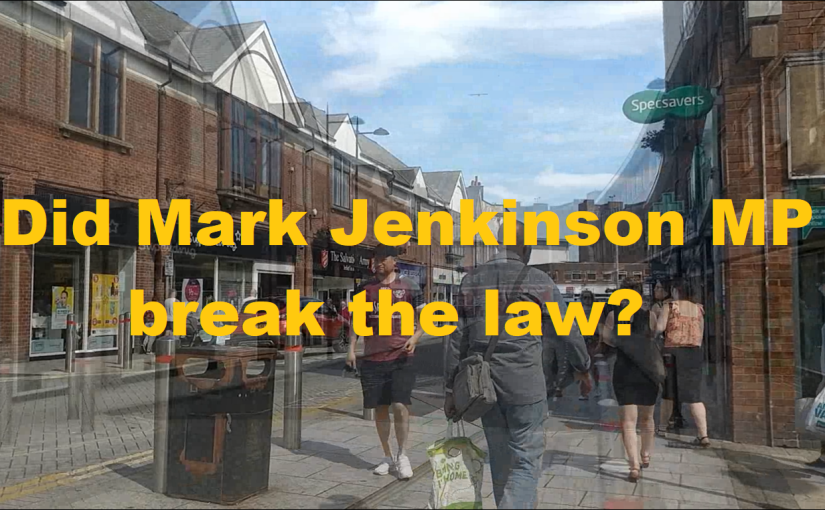 Mark Jenkinson MP isn’t renowned as a law abiding citizen. His recent conviction for driving without insurance seems indicative of his attitude to the laws that the rest of us are expected to abide by. But he excelled himself on Good Friday with an hypocrisy that speaks volumes about his unfitness for the office he occupies.

When an MP ignores lockdown legislation the message he sends to his local constituents could result in more than just a fine – the irresponsible message he sent in the name of his own aggrandisement could cost lives as well.

13/04/2020 Update: Mark really isn’t very bright, is he? He’s left what appears to amount to a full confession on his public Facebook page. I don’t know if the law would take this seriously but I do know that many members of the public certainly will. He’s endangering lives for no good reason in my opinion and ~I have no doubt that others will agree.

Unfortunately I’m barred from commenting on Jenky’s Facebook page but if anyone reading this  would care to pass him this link I’d appreciate it. I’m not one to speak behind anyone’s back – even someone as despicable as our MP undoubtedly is. And to anyone reading this from Mark’s page, please have a look at the section of this blog called MP watch: Mark Jenkinson to get a sense of just who this man really is.

But anyway – to the evidence…

Apparently Mark has arranged for tens of thousands of these leaflets to be delivered, during the lockdown to areas where vulnerable people are situated…

He’s done so via a hand-delivery firm (on street, door to door leafleters in other words) from 35 miles away in Carlisle. That means they’ve travelled to a different town to do work that I think very few of us would consider necessary in these difficult times.

Once here they’ve then gone from house to house, touching letterboxes, garden gates and who knows what before posting Jenky’s propaganda directly into peoples’ homes whether they want it or not. The potential for spreading Covid-19 to these ‘vulnerable people’ is huge and I shudder to think of the damage they’ve done in our community. Cumbria’s already one of UK’s worst hit counties without this egocentric  nonsense making it worse!

Now I understand, of course that Mr. Jenkinson isn’t all that intelligent and he may well not understand the risk he’s taking with the lives of his constituents. But he is bright enough to know that the law is to be abided by – at least he should – he’s responsible for helping make it, after all. So why won’t he stick to the rules laid down by his own government?

Is it that he thinks he’s above all that?

Does he imagine that lockdown only applies to the little people, the honest constituents who voted for him?